In 2020, the graphics card market is the best it's been in quite some time. There's stiff competition between both AMD and Nvidia throughout much of the pricing spectrum and that means there's plenty of choice, and great deals to be had. But all of those options can be quite overwhelming. With so many GPUs, and so many after market choices even among individual models, how do you pick?

If you have a budget of around £500 to spend, what's the best gaming PC GPU you can get? Overall, it depends on what's most important to you.

If you want the absolute most powerful graphics card you can get for your £500 budget, then the Nvidia RTX 2070 Super is the card for you. Released in July 2019 as part of the RTX Turing generation's refresh, it features a cut-down version of the RTX 2080 GPU, but doesn't fall far behind in terms of its performance.

With 13.6 billion transistors, it has a much larger die than the original RTX 2070 and that helps it achieve a noticeable uplift in its capabilities. It features 2,560 CUDA Cores, a base clock of 1,605MHz, and a boost clock that reaches 1,770MHz. While it falls behind the 2080 on CUDA core count, the higher clock speed really closes that gap, especially with overclocking.

Its memory remains at 14Gbps, but it does have additional RT and Tensor cores – 40 and 320 respectively. That makes it much better at handling the Nvidia-driven RTX ray tracing, and deep learning super sampling features. While those remain in use in a limited number of games, they are nice features to have. And the additional cores do make them run that bit better on the 2070 Super than they did on the 2070.

Although there are some 2070s that are a little cheaper than the 2070 Super, get the Super. It's a much more powerful card. 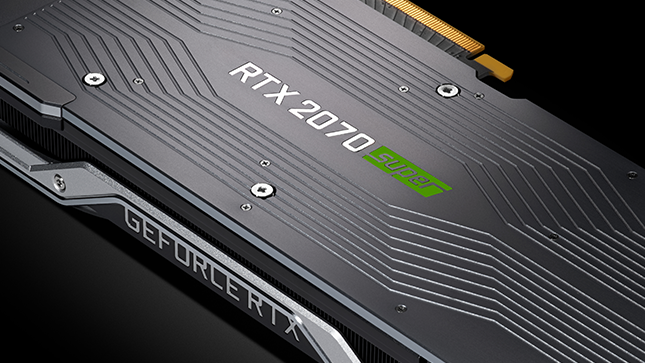 If you're a team red fan and don't like the idea of splashing out all that money on an Nvidia graphics card, then you do have some options with AMD. They aren't quite as powerful, and the feature set is a little different, but they're nonetheless fantastic gaming graphics cards.

At the top end of the pile you have the excellent RX 5700 XT, a card that offers fantastic performance for 1440p gaming and even a little entry-level 4K gaming if you're playing older games or don't mind running at lower frame rates. It features 40 compute units and 2,560 steam processors, and 8GB of GDDR6 running at 14Gbps.

Its clock speeds are a little different than Nvidia's, with AMD no longer quoting base clocks, but more typical "Game Clock" speeds. That starts at 1,605MHz in the reference cards and reaches 1,905MHz when fully boosted, though AMD admits that that's not a figure you'll hit regularly with stock cooling. After market cards can go much further though, with some easily overclocking well over 2GHz.

You might have heard the Radeon VII is a little more powerful, but don't be swayed. It's effectively end of life less than a year after release and is only moderately more powerful in some games. It's a workstation card that's pretty good at gaming too, and is usually overpriced for what you get.

Is it worth spending more?

For £500, the above graphics cards will get you the most for your money, but should you consider expanding your budget, if you can? What options are out there for those willing to spend a little more?

AMD fans don't really have anywhere else to go yet. The Radeon VII is more expensive than the 5700 XT, but isn't much more powerful and certainly offers worse value for money. There are new AMD cards coming later this year that will be more powerful and more expensive than the 5700 XT, but we don't know much about them as of yet.

With Nvidia, there are other options further up the chain and they are much more powerful, but they can get a lot more expensive too.

One step up from the RTX 2070 Super is the RTX 2080. For anywhere between £600 and £750, the standard 2080, even when overclocked by third party manufacturers, just isn't as good value for money. It's only a few percent points faster in some games and though it does have additional RT and Tensor cores to better take advantage of ray tracing and DLSS, the overall package isn't as worthwhile of an investment.

That's why we don't tend to build systems using that GPU any more. It wouldn't be a good value proposition for our customers.

It has over 500 additional CUDA cores, totalling 3,072, and a base clock speed of 1,650MHz. That can boost up to 1,815MHz in the Founders Edition and there are cards from third-party board partners that can clock even higher. Some over 2GHz, when overclocked. That, combined with faster 15.5Gbps memory makes the RTX 2080 Super one of the fastest graphics cards ever made and at a relatively affordable price point.

It's not going to give you an enormous uplift in performance, but depending on the game, you should see an additional 10-20 percent frame rates at the same detail settings and resolutions. The 2080 Super is very much a 4K-capable card too. Where the 2070 Super can handle 4K, the 2080 Super starts to really hit its stride at that resolution. You should have no trouble maintaining 60 FPS in most games at 4K with that card. 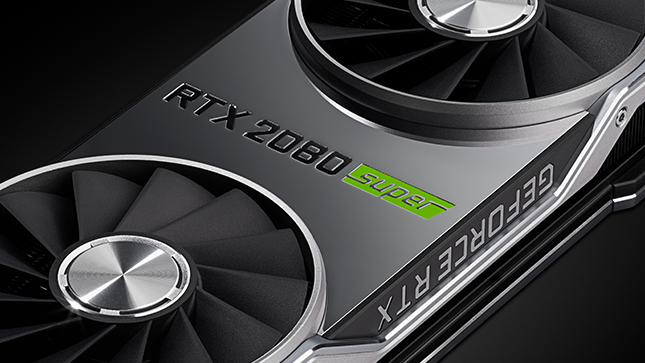 You want the best of the best?

But if that's still not enough power for you, there is one other card you could consider: the Nvidia RTX 2080 Ti. As the most powerful consumer graphics card ever released, it's at the very top of the pile in overall performance, whether you're playing at 4K, or a lower resolution with high-level ray tracing enabled. It's arguably the only card that can really deliver playable frame rates with ray tracing on, and it demolishes every other card at higher resolutions. Check out this blog to get an insight into some of the games that take advantage of Nvidia's RTX capabilities.

One such game is Remedy Entertainment’s Control, released in August 2019. Watch this video to see the 2080Ti's ray tracing capabilities in action!

At around 30 percent faster than the 2080 Super, it's by far the best card you can buy. But it is exceedingly expensive, at over £1,000 in most cases. It's not the card for everyone, but if you're thinking of upgrading to it, we have a whole guide to help you decide if it's the right card for you.

If you need any more help deciding on what graphics card you should buy, then give our Chillblast system experts a call. We've been building high-end gaming PCs for over 15 years and have all the experience and expertise necessary to get you the best gaming PC for your money.

Check out this blog that digs deeper into the differences between the 2080 and the 2080Ti!