In recent years, All-in-one liquid coolers have been the PC enthusiast’s CPU cooler of choice. There’s a general thought that they’re quieter and more efficient at cooling your PC than their air-cooled counterparts. However, that’s not always strictly the case; the combination of fans in the radiator and the pump for the liquid means that they’re not necessarily quieter. Liquid your PC is undoubtedly less-reliable than no-liquid in your PC, regardless of how reliable the cooler is. The additional moving parts of the cooler’s pump means there’s another part to fail in your beloved machine.

However and undeniably, there’s a certain “cool” factor about an AIO cooler that you simply don’t get with a chunky air-cooler. The simplicity and cleanliness of the pipes running to the top of the CPU mean that there’s more room to enjoy the RGB goodness within your PC, more space to see where your hard-earned money has been spent. Since a lot of PC enthusiasts care greatly about how their PC looks, as well as how it performs, we can see why an AIO is a compelling and popular solution.

An Air Cooler to Change that?

It’s been a little while since Corsair has released a new air cooler and, at CES2020, Corsair unveiled its new A500 air-cooler and we’ve since received one for testing.

The A500 is touted as allowing you to drop your temperatures and get the maximum performance from your processor. Corsair claim that at 100% load your CPU temperatures will drop to 48.25degC from 57.07 when using the included stock cooler that comes with your Ryzen 3800x CPU. This temperature drop (in Corsair’s testing) results in an increased average frequency of 4181MHz, up from 4115MHz on the stock cooler.

This is all standard fare for an aftermarket cooler. Of course, it improves your CPU temperatures over the stock-supplied cooler. We would be concerned if it didn’t. What we want to know is how it performs in real-world scenarios and what are the benefits of this cooler over another.

It has the looks

As mentioned, we PC gamers want our rigs to look as good as they perform. Typically air coolers haven’t always been the prettiest component in the case. Corsair is attempting to change all of that with its new sleek design.

You can tell as soon as you open the box that Corsair is pushing for the premium market with this cooler. The packaging is sturdy, and the cooler comes packaged in a clam-shell plastic holder that protects it nicely. What’s nice here is the added extras in the box. You receive additional XTM50 Thermal Paste, as well as what’s included on the pre-pasted heatsink. You receive an especially long screwdriver to make mounting the cooler a little easier and simpler – a nice touch. You’ll also receive your mounting hardware and the usual literature.

The A500 sports a modern triangulated pattern throughout the visible faces cooler, and the removable top plate is finished in a brushed bronze finish. An understated and clean look that’s going to feel at home in most people’s rigs.

The dual ML120 fans are mounted very uniquely (more on this later) on the sides of the cooler. Corsair doesn’t make a song-and-dance about it and you’ll struggle to find a single mention of it on their product page but It’s almost as if they’re trying to hide the fact that these fans are RGB capable. They hide it so well, in fact, that I’ve now had to re-write a whole paragraph on my disappointment that they’re not RGB. I personally think the cooler would look nicer given all-black fans, but we can appreciate the wider appeal that an RGB element gives a product like this.

Moving on to the heatsink and heat pipes themselves. The aluminium heat sink and copper heat pipes have been coated in the same metallic silver finish to give a seamless look across the board – adding to the premium look and feel of this cooler. 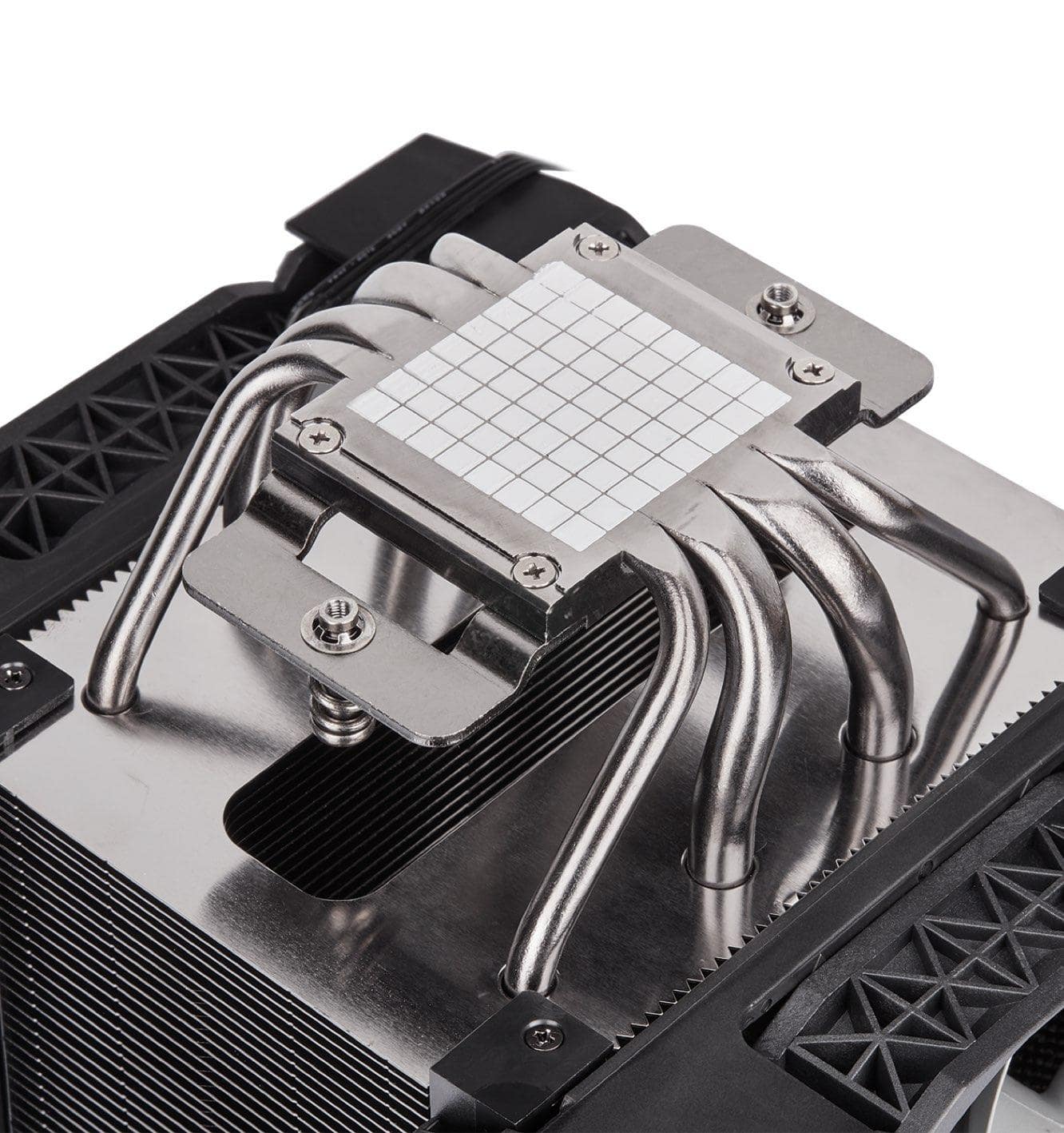 Let’s dive into the nitty-gritty of this cooler, does it have the chops to be a CPU Cooler worth considering?

To wick heat away from your CPU, the A500 uses four direct contact CPU pipes. Two 8mm heat pipes running down the centre, flanked by a 6mm heat pipe on either side ferry your CPU’s heat up to the aluminium radiator. Most CPU coolers of this design will use heat pipes of the same size, corsair claims that that the varied diameter of the heat pipes allow for better cooling characteristics.

The large broad heat sink suggests it’s going to be excellent at expelling the heat into the case. However, there’s a large “cavity” in the centre of the heat sink available when removing the top cover. This cavity makes it very convenient to install the heatsink with the included screwdriver, but we can’t help but wonder about the lost heat dissipation.

Moving onto the main feature of the A500, the cooling fans. The two included cooling fans are Corsairs ML140 RGB fans. These Static Pressure PWM fans feature a Magnetic levitation bearing system, making them very reliable and helps with reducing noise. They are RGB capable for all of your iCue customisation. And they have a respectable 55.4CFM flow rate.

It’s not the fans themselves that are the innovative point of the A500 cooler, however, It’s the way they are mounted. The A500 has its fans mounted an a sliding rack. This slider allows the fans to shift upward, creating space underneath to mount high-profile RAM which would otherwise foul on the cooler. The innovation is great. From our point of view, we often come across RAM and cooler incompatibility which means we can’t continue building a customer’s PC until we resolve the conflicting parts.

The sliding fans are a very nice touch. Now we just need to ensure that there’s plenty of room in the case for the extra height added by the raised fans. The fans can slide so much, in fact, that it’s possible to have only 50% of the fan blowing air onto the radiator. We’re not sure why anyone would want to do this, but PC’s are all about customisation.

The A500 is compatible with all modern CPU sockets: AMD AM4, AM3, FM2, Intel LGA115x, LGA20xx and there’s been some thought put into the mounting system. There’s simplicity in the install process (not that you need to worry about that with Chillblast), and for such a large cooler, it feels like a very secure system.

Does it have the performance?

This is what we’ve all been waiting for, isn’t it? The most important aspect of this cooler is how it performs. Our test methodology revolves around a “Typical User Experience”. There are plenty of reviews available that go through the A500’s ability to cool the top-of-the-range CPUs. But what about your everyday, common mid-tier to high-end PC build where this cooler is more likely to be used.

We’re testing on the i7-9700k at stock frequencies, a common configuration for many PC users looking for serious performance without spending a huge penny.

Our methodology is simple and again is a good reflection of common use cases. The test configuration is left to idle at minimum load to establish an even and consistent baseline temperature above ambient. We record the temperatures and we record the noise level coming from the test-rig from 1m away.

This allows us to see the performance of the cooler under average use cases, and at it’s most maximum performance setting.

At Idle in our testing, the A500 performed very well. The CPU remained only a 5.8degC above average, and just 29.4db(A). At idle and in moderate use this CPU Cooler unleashes just a small hum to the outside world. It’s a nice and quiet cooler, comparable and competing with the greats.

However, under full load, the CPU cooler is a smidge louder than the loudest coolers we’ve tested. The fans just seem to scream at those higher RPM ranges when compared to their quiet performance at low RPMs. The temperatures however remained a cool 36degC above ambient – a respectable performance. Using Corsairs PWM adjustment with these fan’s, if we were using it on our system, we would be tempted to reduce the fan RPM, even at higher loads, to help reduce the noise output.

Corsair’s A500 Cooler is a welcome innovation in an otherwise well-trodden product range. The cooler is undoubtedly premium, with packaging, parts and looks to match. The inclusion of RGB fans are a welcome addition to will appeal to a huge range of customers, and their performance is good enough for most average users. If you’re a high-end user, looking for a performance cooler, you’ll need to choose between the lowest temperatures or the quietest PC, there’s little room for both.